Notice is hereby given that assessment inventory and valuation data is available for examiniation and review.  This data is the information which will be used to establish the assessment of each parcel which will appear on the Tentative Assessment Roll of the Town of Lindley which will be filed on or before May 1st, 2015.  The information may be reviewed, by appointment, in the Assessors Office at 637 US 15, Lindley NY 14858 between the hours of 4:00pm and 8:00pm on April 6th.  An appointment may be made by telephoning the assessor chair at 607-523-7363.
3/26/15
Harry Pierce


Posted by lindleytc at 1:08 PM No comments:

The Town Clerk's Office will be closed Wednesday, April 1st, for training.

Posted by lindleytc at 1:03 PM No comments:

THE BOARD OF ASSESSMENT REVIEW WILL MEET ON GRIEVANCE DAY MAY 26TH FROM 10:00am-2:00pm and 5:00pm-8:30pm AT THE LINDLEY TOWN HALL, 637 US 15, LINDLEY NY, 14858 IN SAID TOWN, TO HEAR AND EXAMINE ALL COMPLAINTS IN RELATION TO ASSESSMENTS, ON THE WRITTEN APPLICATION OF ANY PERSON BELIEVING HIM OR HERSELF TO BE AGGRIEVED.
By order of the Assessor Chair
Harry Pierce
607-523-8816

Posted by lindleytc at 9:47 AM No comments:

Court office will be closed March 30th, 31st, and April 1st for training.

Thank you
Posted by lindleytc at 10:11 AM No comments:

Code Officer in training the week of March 23rd-27th

The Code Enforcement Officer is in Oriskany taking Floodplain Management Training the week of March 23rd-27th.  You may call and leave a message at 607-329-0436.  She will return calls starting the week of the 30th.

Thank you
Posted by lindleytc at 8:32 AM No comments:

The Lindley Senior Citizens Group will now meet at the Lindley Town Hall, 637 US 15, Lindley NY, on the 2nd Friday of the month from 12:00-2:00pm.  This is a dish to pass lunch.  Come join your friends and neighbors to talk about things that interest you!

Zoning Board of Appeals Meeting Cancelled


Notice is hereby given that a Public Hearing before the Lindley Zoning Board of Appeals will be held Wednesday, March 18th from 6:00pm to 7:00pm at the Lindley Town Hall, 637 US 15, Lindley NY 14858 to consider an Area Variance for Brenda Keegan residing at 1657 Clendenning Rd, Painted Post, NY 14870.  All interested persons are requested to attend.
By order of the Zoning Board of Appeals
Steven Ritter, Chairman
3/6/2015
607-523-8816
Posted by lindleytc at 8:44 AM No comments:

Please note that the Lindley Court Office will be closed March 18th and 19th for training.


Posted by lindleytc at 9:26 AM No comments:


Posted by lindleytc at 1:40 PM No comments: 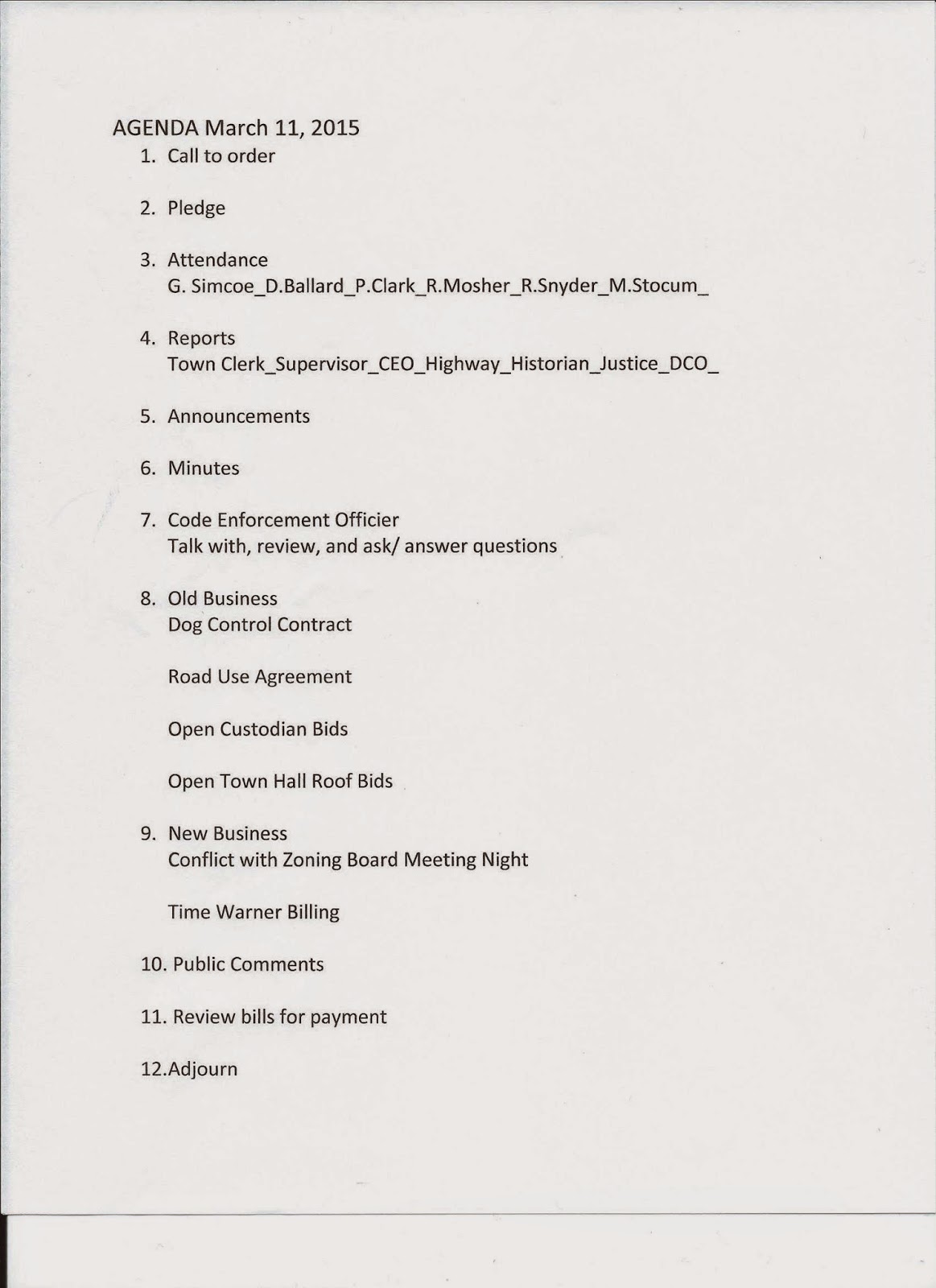 Posted by lindleytc at 9:11 AM No comments:

Posted by lindleytc at 9:03 AM No comments:

Hello Everyone interested in Lindley History ,
The Lindley- Presho Historical Society will come out of hibernation on Wednesday March 11,2015   7 P.M  at the Middletown (Addison ) Museum at 41 Main Street---Addison,N.Y.
The meeting is free and open to the public.
The guest speaker will be Lindley’s own native son –Durland Weale. Durland who  grew up in Lindley is a member of the LPHS. He has donated several items to the Lindley Historian files and has presented several interesting programs at our meetings.  As one of our few remaining “youngsters of his generation” , he has been very helpful in adding to the Lindley History files.
The topic of his program on the 11th will the Depression Years in Addison. (*the Great depression occurred after the collapse of the stock market on October 29th,1929 and was known as” Black Tuesday “. It affected the United States and the World Economy.) (*Ref.announcement in Addison Post February 28, 2015.)
If you haven’t visited the Middletown Museum( in Addison )and enjoyed their exhibits, this will be a great opportunity to see it and to hear Durland’s memories of Depression Days.  Without a doubt , the effects in Addison were,also, felt by  Lindley residents.
Let’s surprise Durland and have a good representation from Lindley –where he lived during the Depression years.( I won’t give his age..)
Think warm weather --

Posted by lindleytc at 10:26 AM No comments: