Minutes of the March meeting were read. Fran made a Motion to accept the minutes as read, Earl seconded and the Motion passed unanimously.

Mary reported that Jennifer Fais states that both Minor and Major Sub-Divisions in the Town require a Public Hearing. The Board decided a clarification of the definition of a Minor and a Major Sub-Division is needed before updating the Town Law. The brochure entitled: The Short Course, A Basic Guide for Planning Boards, might be a good starting point for this information. Jim will research the information but stated all members should participate in the update.

It was noted that the resident's need for Flood Insurance in the Town is what prompted the necessity of a Zoning Law.

Jim's article to the Addison Post concerning Sub-Divisions will be held back until the Law has been updated.

Fran submitted her report on the Leadership Conference she attended April 5 at CCC. She stated the morning sessions on "Mock Planning Board Takes on Wind Power" (a skit) and "Foil and Open Meetings" were very beneficial. Afternoon session: "Planning Board Overview-Part 1 and Planning Board Overview - Part 2 was a Slide Show. Handouts included: Training for Planning Boards and Town Boards; Building & Code Enforcement Software; booklet entitled, Local Open Space Planning Guide; CD entitled Success and Savings Through Intermunicipal Cooperation - Community Teleconference; Infornation on grants and 1% loans; Rural Development and Financial Programs for Community and Economic Development; and Questions for theAnalysis and Evaluation of Existing Zoning Regulation.

Mary noted certificates of attendance must be kept.

Mary stated that the Town has received a letter from Mr. Hawbaker's representative, Mr. Phil Knapp, stating it is impossible for them to change their plans, that the Town is being unco-operative and will not accept their offer. He has asked for signatures of approval from Sally and Town Planning Board members. Mary informed the Board that the Town has never received a formal proposal of Hawbaker's intent and until they do receive an official proposal, the process cannot proceed as required by the Zoning Law.

Mary stated that she received a call on Friday from the Office of Parks, Recreation and Historic Preservation regarding a letter they received from Hawbaker's consultant, Mr. Gregory Sovas, stating it is impossible for them to change the location of their equipment so the barns need to come down. Further he stated that the Town is being uncooperative in documenting that they will not maintain the barns. Gerry Simcoe presented a copy of a letter he received as Town Board member. It was from another Hawbaker representative, Mr. Phil Knapp, asking for signatures from Sally Orr and Town Board members acknowleding that the Town will not maintain the buildings. The Town Board has not yet received a proposal from Hawbaker regarding the historic buildings.

Mary also received a copy of a letter sent to and received October 10, 2006 by Ms. Nancy Herter, Historic Preservation Specialist, New York State Office of Parks, Recreation and Historic Preservation written by Gerry Gross stating her views on the Hawbaker Mining request, the preservation of the tobacco barns on the proposed mining site and lobbying for support for granting the permit. The letter appeared to be presenting the opinion of the Planning Board.

Mary asked Gerry whether or not she can remain objective when it comes time to review the Hawbaker application? Gerry stated "Yes" she could. When asked how Hawbaker had a copy of the letter and not the Town, Gerry indicated that Nancy Herter must have sent the letter to Hawbaker. Mary stated that as Planning Board members we need to follow the process.

Fran was just trained on the latest FOIL requirements and reminded the Board it is imperative to record and file all communications concerning Town Business.

Fran made a Motion that the Board write a letter to the NYS Office of Parks, Recreation and Preservation to clarify that Gerry's letter was written as a resident of theTown and was not a Town Planning Board letter. The Motion was seconded by Jim and approved unanimously.

Pat suggested that Dick Johnson be invited to the next meeting of the Board to get his opinion and views on the type of gravel he needs; and whether or not the proposed mine will benefit the Town. Fran will make up a list of questions to ask Dick. Mark will talk with CEOs from other Towns concerning their regulations on mining.

Gerry asked Dave for an update on the Heffner situation and suggested perhaps the Health Dept. should be involved. Dave had no further information.

A Motion to adjourn at 8:15 pm was made by Earl, Gerry seconded and all agreed. 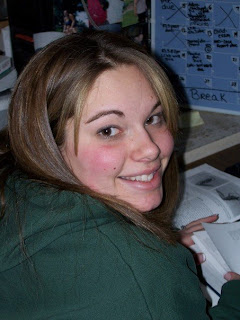 The Town Clerk's Office will be closed May 26, 2007 to attend the College Graduation of our very own Deputy Town Clerk...Sara Snyder. Sara is Graduating (with HONORS!) with a Bachelors Degree in Occupational Therapy. She isn't quite done yet though, as 4 days after graduation she begins her field period and fifth and final year of college to obtain her Master's Degree from Keuka College. It has been a long, hard road but she has made it and her family is very proud!


The Town Clerk's Office will also be closed on Monday May 28, 2008 in observance of Memorial Day. Have a safe holiday.
Posted by Deb and Bruce Snyder at 5:39 PM

Mile One Construction-Scenic View of Lindley 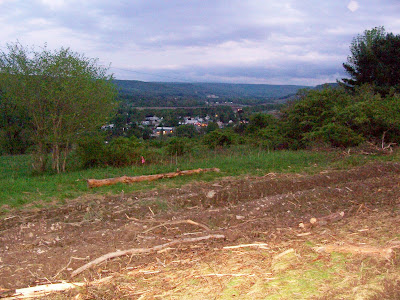 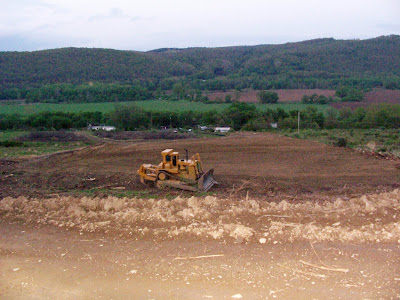 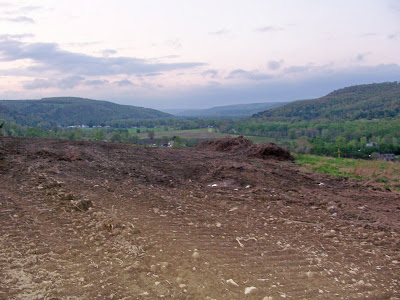 Labels: Maiden Ride on Mile One

I. Call to Order
II. Pledge to the Flag
III. Minutes
IV. Announcements

1.) Bridge closing on River Road (Ct.73) near Manley Hill Road from May 7 to June 15. The road will be closed to replace an arch pipe with a concrete box culvert. There will not be an onsite detour.
2.)A Public Open House/Project Workshop will be held May 9, 2007 from 6 to 8 p.m. for the River Road (Ct.73) over Tioga River Bridge Reconstruction Project. Representatives from the Steuben County Department of Public Works, Project Consultants and the NYSDOT will be present to accept questions and comments. Aerial photographs and preliminary plans for the project will be available for public viewing.
3.)Jim Lundgren decided he will not be able to mow the Lindsley Burying Gound this season. Members of the Town Board are actively searching for lawn mowing contractors to bid on the job.
4.)Kyle Kollhoff has taken a fulltime position with a company and will not be able to paint the trim on the Town Hall. Members of the Town Board are actively searching for contractors to bid on the job.
5.)The Five-Year Plan Committees will report their recommendations and findings (if concluded) at the June 11, 2007 Town Board Meeting.
Investment Committee: Chair Sally Orr and Committee member Kathy Biggio. Investigating potential revenue possibilities through investing, direct sales tax payments and grants.
Re-val Committee: Chair Paul Mortzheim and Committee members Kathy Biggio, Harry Pierce and Brenda Criss. Investigating re-val process and resulting tax implications to determine negatives/ benefits to Town and individuals.
Property Uses Committee: Chair Gerry Simcoe and Committee member Mary Lentzen. Identifying property uses the Town should encourage to generate revenue.
Revitalizing Farm Land Committee: Chair Paul Stermer and Committee member Ken McKillip. Investigating alternate uses to get more agricultural land working.
Highway Committee: Chair Sally Orr and Committee member David Woythal. Studying cost of materials, labor and property tax implications to improve Town roads over a five year timeframe.
Clean up and Town Code Enforcement Policy Committee: Chair Jake Gross and Committee members Dave Fuller CEO and Steve Ritter. Determine potential benefits of program(s) that encourage clean up/renovation of properties and define Town code enforcement policy.

Glenn O. Hawbaker Mine Site: Background—The New York State Office of Parks, Recreation and Historic Preservation (OPRHP) is requiring Hawbaker, who is acting on behalf of DEC, to provide documentation of their efforts to “fully explore all feasible and prudent alternatives and give due consideration to feasible and prudent plans which avoid or mitigate adverse impacts on such property,” pursuant to Section 14.09 of the Parks, Recreation and Historic Preservation Law.

Hawbaker is formally offering the donation of the four (4) barns and one (1) tobacco barn to the Town of Lindley. Hawbaker will dismantle and transport the barns to Town property at Hawbaker’s expense. It would be the Town’s responsibility to reconstruct the barns. If private citizens within the Town would like to purchase the barns, Hawbaker would be receptive to offers.

If the Town does not accept the offer of the barns, Hawbaker is prepared to sell the barns to Lignum-Vitae, a Middlebury, Vermont company that specializes in the purchase and reconstruction of the barns on private properties throughout New England. This approach was selected by Hawbaker as preferable to the demolition of the barns. The farmhouse will be razed.

Note: The barns in question are located on the Youngs Farm property on River Road, the proposed site of the Hawbaker sand and gravel mine. Also, Hawbaker has permitted the Town to advertise the sale of the barns to interested citizens of the Town of Lindley for 30 days, ending advertisement June 30, 2007.

1.) Motion to approve the donation of the four (4) barns and one (1) tobacco barn from Glenn O. Hawbaker to the Town of Lindley.

2.) Acceptable Training for Planning Board and Zoning Board of Appeals Members Resolution (Note: Motion not defined at this writing.)

4.) Motion to approve bid submitted by Don’s Flooring for $700.00 that includes material (5 boxes new VCT, 8 feet rubber reducer, bucket of glue, 20’-1/4 round molding) and labor for floor replacement in lobby of Post Office.

Note: Agenda subject to change before Town Board Meeting. 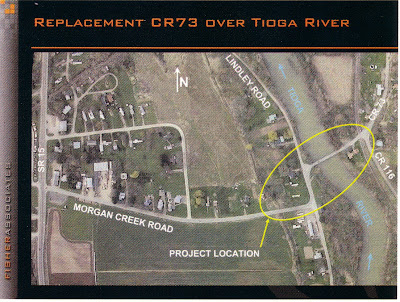 You are invited to participate in a Public Open House/Project Workshop for the CR#73 over Tioga River Bridge Reconstruction Project. It will be held on Wednesday, May 9, 2007 from 6 to 8 p.m. at the Elroy H. Young Municipal Building located on U.S. 15 in the Town of Lindley.

Representatives from the Steuben County Department of Public Works, Fisher Associates (Project Consultants), and the New York State Department of Transportation will be present to accept questions and comments. Aerial photographs and preliminary plans for the project will be available for public viewing.

Bridge No. 73-8, the River Road in the Town of Lindley, will be closed to all traffic in accordance with the provisions of Section 234 of the Highway Law. The bridge is located near Manley Hill Road intersection. The bridge will be closed on or about Monday, May 7, 2007 through Friday, June 15, 2007. There will not be an onsite detour. This road will be closed to replace an arch pipe with a concrete box culvert.

Information from May 1st meeting of the Area Wide Transportation Committee.